Updates from Achievers U12 Major League’23

Achievers Cricket Academy recently conducted the Achievers Major League U-12 at CRWA ground during the final week of December 2022 and the tournament turned out to be a great success amongst the academy students who got to showcase their skills in some closely contested matches 🏏🙌. The academy students recieved a platform to perform and it was a great exposure for the young talents at Achievers Cricket Academy.e

In the all important finals, Achievers Red team won the tournament while Achievers Blue emerged as the runners up. The following students from the Academy left behind a substantial impact and bagged individual awards🏅

The Academy now moves on to the new year, with much more of such exciting matches and opportunities in store for the students 🙌

The Annual Sports Day of Mithibai College provided a platform for students to push their limits and showcase their strengths in various track and field like the 100m, 200m, 400m , 4× 100m (relay) or long jump and shot put. The Sports Committee pulled off the events smoothly by maintaining the morale of the participants […] 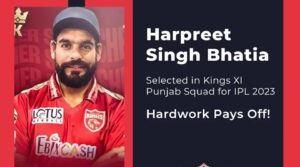 Harpreet Singh Bhatia – a domestic cricket veteran who has also represented India in U19 World Cup gets picked up by none other than Kings XI Punjab for the latest edition of IPL. Harpreet who is currently the captain of Chhattisgarh Senior Team has led from the front for his state not only as a […]