Established in 1971 during the time when hippies ruled the party scene in goa, Tito’s became a place where every tourist wanted to visit atleast once for his vibrant vibes, cuisine and diverse people coming every day to have a blast. At Tito’s, dinner was often served amidst the roaring sound of the waves of the Arabian sea and light effects in a tradional goan lantern. The overall atmosphere of entering tito’s always brought us into a different world and that’s how it became so popular through its amazing hospitality.

Often hailed as the king of nightclubs in Goa, the most high profile Dj’s, rockstars and musicians have performed at this iconic place and during peak dates, you can see as many as 3000 people from different corners of the world thronging at this place. Just to go by some statistics, Tito’s every month attracted close to 1 lakh tourists with close to 17,000 parties hosted by them since their inception. Also it goes without saying, Tito’s was often frequented by some of the most gorgeous people in the entertainment industry, high profile celebrities, politicians and foreign diplomats.

However, the sad news is that Tito’s has completely shutdown thanks to the pandemic which has destroyed the entire tourism business in Goa. Ricardo Joseph D Souza, the co-owner of Tito’s shared an emotional post on facebook:

“It is with sadness but with anger that we have sold our entire business in Goa. I personally have suffered the least as I was compensated adequately and even my future generations won’t have to work. I will also share some with our staff, but in the long term they now have no jobs. Can i please ask our officials to employ them as I do not ever plan any more business in Goa. By ” officials” i mean all the harassing lot, like police, pda, crz, ngos, panchayat n sarpanchas ( not Shawn Martins ), bdo, dy collectors, Am very grateful to certain segments of the Government like Dr Sawant , the IAS officers, ex staff , present staff, our neighbours , all my friends and family and the common people of Goa who all contributed to this great Brand called TITOS. End of an Era! 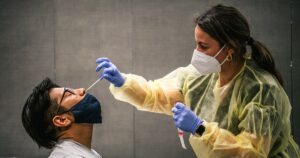 For the uninitiated, Vlebazaar is an online fraud shopping website like thousands of other online shopping websites where it shows you can purchase mobiles, electronics and many other products. Also these sites are designed so professionally that for a moment you will blindly forget that it’s a scam, it will appear as good as Amazon […]